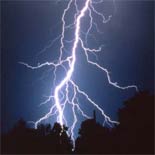 Properties in Calumet City are subject to three flood problems: overbank flooding, local drainage, and sewer backup. You could be faced with one, two or all three of these hazards.

Overbank flooding: While the Grand Calumet River flows along the City’s northern boundary, it stays within its banks and does not present a flooding hazard. The real problem is overbank flooding from the Little Calumet River in the southern part of the City. The approximate boundary of the 100-year floodplain is shown as Zone A on the map on the next page.

The first major flood in recent memory on the Little Cal was in June 1981. It was followed by a flood almost as high in December 1982. The Little Calumet’s highest flood on record (so far) occurred in November 1990. Heavy local storms caused the river to rise over half a foot higher than the 1981 record. It was estimated to be a “25-year” flood. The July 1996 flood came within inches of the 1981 flood.

Construction of a levee on the Little Cal during the 1980’s kept the 1990 and 1996 floods out of most of the town. However, a flood of as little as one half foot higher than the 1990 one would overtop this barrier and cover many blocks.

Local drainage: Calumet City’s local drainage problems are primarily due to backed up combined sewers and storm sewers. The sewers are designed to drain streets and ponding areas along with transporting sanitary sewage to treatment facilities. When they are blocked or overloaded by heavy rains, the drainage system is plugged. Stormwater sits for hours or days, waiting for the sewers to clear.