April 3, 2018 by CalumetCityAdmin in Uncategorized

For a PDF version of the following press release, click Here. 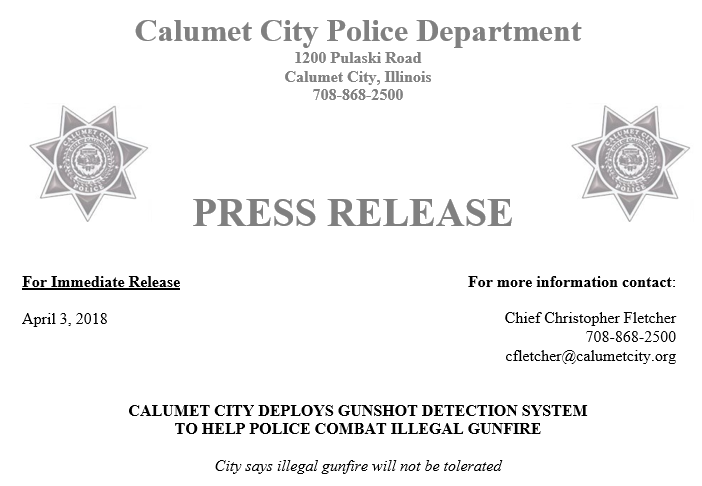 Calumet City, IL (April 3, 2018) – Calumet City today joins a select group of crime-fighting agencies utilizing gunfire detection technology to deliver real-time alerts to Police in a matter of seconds.  The Police Department rolled out its crime-fighting heavy hitter, aptly named ShotSpotter, joining a group of less than 100 cities across the world to use sound waves to detect criminal activity related to gunfire.  Police and City officials believe their investment, approximately $250,000, sends the message that gun crime will not be tolerated in their town.

Police Chief Christopher Fletcher puts it plainly:  “this technology will definitely reduce crime, I’ve seen it.”  A law enforcement professional with over 30 years of experience with the neighboring Chicago Police Department, Chief Fletcher began researching and demoing ShotSpotter over the past year.  After a series of discussions and a public council meeting presentation, the Police Department received the go-ahead in November from the City Council to implement the cutting edge technology.  While carrying a high price tag, ShotSpotter will be funded – at no taxpayer expense – through a program which utilizes money recovered from drug seizures and illegal activity.

In addition to the Chicago Police Department, ShotSpotter is used in New York City, San Francisco and Boston.  Calumet City will be the only south suburban city with ShotSpotter.

ShotSpotter works by coordinating a series of audio sensors throughout the city.  When a gunshot goes off, the sensors triangulate the sound and pinpoint the number of shots fired and the location.  ShotSpotter acoustic experts, on duty 24/7/365, review and qualify all gunfire incidents.  Law enforcement officers receive alerts, within a minute and usually within 30 seconds of the gunshot occurring.

As the CCPD works hand in hand with neighboring departments in the mission to combat crime, Chief Fletcher says he is working with bordering agencies to provide them access to ShotSpotter alerts as well.  The gunfire detection software will be able to provide intelligence to bordering towns such as Lansing, South Holland, Dolton and Hammond, Indiana.

The premise of the software is simple:  gunfire alerts allow responding officers to get to the scene faster and more safely, recover evidence such as shell casing or guns, interview witnesses, and ensure timely medical attention of any gunshot victims.  The overall goal is to reduce gun violence and improve community safety.

“The City Council and I are proud to be able to equip our police officers with a resource like this to make our community safer for everyone,” says Mayor Michelle Markiewicz Qualkinbush. “We are committed to protecting and improving the safety and quality of life of our residents.”

Police Chief Fletcher says no community is insulated from the problem of illegal gun use.  And though Calumet City is experiencing a reduction in gunfire incidents, he believes that ShotSpotter will further ensure that reduction continues.

“ShotSpotter will bring us into 21st century policing technology and will solidify our position as a cutting-edge and progressive Police Department,” the Chief explains.  Evidence that gun violence is not solely an urban problem is obvious.  Seconds count, he adds, when public safety officers respond to gun violence, and ShotSpotter will definitely cut valuable seconds from response time.

Up to this point, he notes, police only had the information provided from witnesses and callers.  Sounds can bounce off buildings, and their locations can be hard to detect by ear.  Importantly, recovering shell casings, which provide critical evidence, is nearly impossible when operating in the dark or on a street where passing vehicles pick up evidence in tire treads.  Despite the access to ShotSpotter, the Chief encourages all citizens to report any suspicious sounds or activities immediately.

“There are no wasted calls to the Police,” he emphasizes.  “It’s our duty and privilege to protect and serve to our community.”